Old Saint Nick is in need of an eco-friendly makeover.

​ Santa Claus isn’t real. Yet millions of young children in the western world believe in him. The whole adult population accedes, and acts out, this cultural fantasy. It’s the most famous unifying mythology we have in our secular world.

The idea of EcoSanta came to me after one particular Christmas, as I watched my husband, Peter, in rain-gear and red balaclava, haul a huge piece of netting along our storm-racked beach. 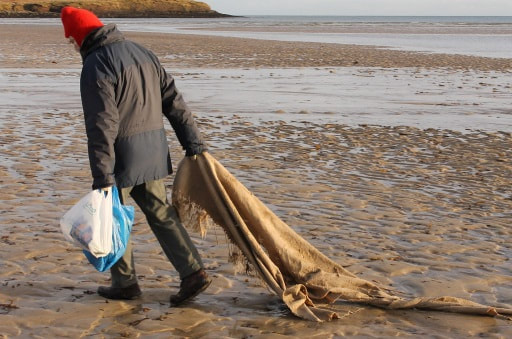 Historically, Santa has a forebear. Saint Nicholas of Myra was the children’s patron saint whose generosity and kindness extended to all. Today, of course, Santa is better known for the toys he delivers to children on Christmas Eve, and the cookies he devours in the process.

But Santa must evolve. He has to become more meaningful, more relevant, more present. Santa’s way of being in the world, as the children’s greatest gift-giver, needs bringing up to speed. What we need is a Santa children will want to emulate, and who can help them learn to serve the Earth as a long-term thank you for the miracle of life.
e’d been running Ecologisers, the Young People’s International Anti-litter and Environmental Charity, for a couple of years at that point.

Our mission was to change the image of litter-picking in the minds of young people from a “yuk” to a “wanna-do” activity by any and all means that came to creative heart and imaginative mind. It was a wide remit.

Dressed as junk-jesters, we gave anti-litter presentations in schools to encouraged entries for our Humorously Captioned Children’s Photography Competition on an anti-litter theme. Local businesses were supportive, providing 20 prizes to the winners. The youngest winner was just 1 year old. Ecologisers followed this project up by giving several video-conferences to student-teachers at our local university campus.

As the idea of EcoSanta grew, n, the new basis for our work became: Once his sack is empty, EcoSanta is asking children, worldwide, to help him fill it with rubbish the rest of the year as a gift to the Earth. After I’d memorized that appallingly long sentence I tried it out on a few mothers with children. Slow smiles spread across their faces and their eyes lit up when they heard it. So we started to spread the word.

​As the EcoSanta litter-picking campaign evolved, I wanted to take our work to the next level. Further development of the idea yielded EcoSanta as the Children’s Environmental Champion, a ten year project to promote, publicize and popularize EcoSanta as a year-round environmental hero. The Canadian magazine Green Teacher published Helping Ecosanta, which offers a smorgasbord of ways to bring together personal skill sets with the EcoSanta concept, and have fun doing it.

Ecologisers’ annual EcoSanta-themed Short Story Competition invites writers to explore EcoSanta’s exploits and effectiveness, on that fantasy-reality cusp. It stands as a good barometer of EcoSanta’s potential contribution to consciousness-change.

And EcoSanta’s Favourite EcoSongs offer another avenue for engagement. Through this project, I use out-of-copyright Christmas songs — including classical, pop, Christian hymns, Christmas carol tunes, folk, and rap — and put celebratory, positive, empowering, uplifting eco-lyrics to them. More than half of the 88 EcoSongs I have written over the last seven years have been recorded by various artists, from children’s choirs to professional musicians and singers on both sides of the Atlantic.

Currently, I am working on ‘Celebration Earth: the EcoSanta Musical’ as another way to bring earth-awareness into the culture. For me, music-therapy is a close runner-up to eco-therapy.

In going back to childhood’s Christmas magic and re-purposing it lies opportunity. The opportunity to re-see the Earth, and all life, including our own species, as the miracle they are. This is not something we simply sometimes forget about. It’s something that doesn’t enter the mainstream agenda in the first place, because Western society is not gratitude-oriented towards the Earth.

​It also offers an opportunity to reach young children in a way that cold hard facts and data simply cannot, and to present EcoSanta as fully involved in our modern world and its ecological problems forwards the integrative way of thinking. Bottom line, engaging with EcoSanta is fun. Humor is much needed to lighten our hearts and fire our courage. It’s a gentle way to court a solution-oriented mindset.
Ecologisers growth is organic. Three times we re-aligned its mission to make it more effective and give it more gravitas. Today, under the auspices of EcoSanta, it encourages children and their families to get real environmentally. Who knows! With his global take on life, EcoSanta might one day encourage us to celebrate Winter Solstice — the return of the light and growth to the northern hemisphere.
There are many ways we can frame ecological concern, and many tools we can use to spur action. Presenting Santa Claus as EcoSanta to the next generation offers one way to change future culture, and chart a path forward out of the Anthropocene.